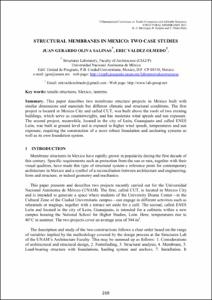 Show full item record
Oliva Salinas, Juan Gerardo
Valdez Olmedo, Eric
Document typeConference report
PublisherCIMNE
Rights accessOpen Access
Abstract
This paper describes two membrane structure projects in Mexico built with similar dimensions and materials but different climatic and structural conditions. The first project is located in Mexico City and called CUT, was built above the roofs of two existing buildings, which serve as counterweights, and has moderate wind speeds and sun exposure. The second project, meanwhile, located in the city of León, Guanajuato and called ENES León, was built at ground level and is exposed to higher wind speeds, temperatures and sun exposure, requiring the construction of a more robust foundation and anchoring systems as well as its own foundation system.
URIhttp://hdl.handle.net/2117/185442
ISBN978-84-941686-0-4
Collections
Share: