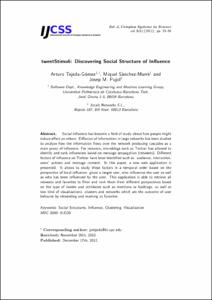 Pujol Serra, Josep M.
Document typeArticle
Rights accessOpen Access
All rights reserved. This work is protected by the corresponding intellectual and industrial property rights. Without prejudice to any existing legal exemptions, reproduction, distribution, public communication or transformation of this work are prohibited without permission of the copyright holder
Abstract
Social influence has become a field of study about how people might induce effect on others. Diffusion of information in large networks has been studied to analyze how the information flows over the network producing cascades as a main proxy of influence. For instance, microblogs such as Twitter has allowed to identify and rank influencers based on message propagation (retweets). Different factors of influence on Twitter have been identified such as: audience, interaction, users’ actions and message content. In this paper, a new web application is presented. It allows to study these factors in a temporal order based on the perspective of local influence: given a target user, who influences the user as well as who has been influenced by the user. This application is able to retrieve all retweets and favorites to filter and rank them from different perspectives based on the type of tweets and attributes such as mentions or hashtags, as well as two kind of visualizations: clusters and networks which are the outcome of user behavior by retweeting and marking as favorites.
CitationTejeda, J.; Sanchez, M.; Pujol, J. tweetStimuli : discovering social structure of influence. "International Journal of Complex Systems in Science", 17 Desembre 2012, vol. 2, núm. 1, p. 33-36.
URIhttp://hdl.handle.net/2117/18541
ISSN2174-6036
Publisher versionhttp://www.ij-css.org/volume-02_01/ijcss02_01-033.pdf
Collections
Share: