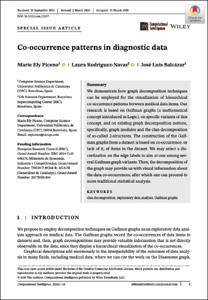 Except where otherwise noted, content on this work is licensed under a Creative Commons license : Attribution 3.0 Spain
ProjectGESTION Y ANALISIS DE DATOS COMPLEJOS (AEI-TIN2017-89244-R)
AUTAR - A Unified Theory of Algorithmic Relaxations (EC-H2020-648276)
Abstract
We demonstrate how graph decomposition techniques can be employed for the visualization of hierarchical co-occurrence patterns between medical data items. Our research is based on Gaifman graphs (a mathematical concept introduced in Logic), on specific variants of this concept, and on existing graph decomposition notions, specifically, graph modules and the clan decomposition of so-called 2-structures. The construction of the Gaifman graphs from a dataset is based on co-occurrence, or lack of it, of items in the dataset. We may select a discretization on the edge labels to aim at one among several Gaifman graph variants. Then, the decomposition of the graph may provide us with visual information about the data co-occurrences, after which one can proceed to more traditional statistical analysis.
CitationPiceno, M.; Rodríguez-Navas, L.; Balcázar, J. L. Co-occurrence patterns in diagnostic data. "Computational intelligence", Novembre 2021, vol. 37, núm. 4. p. 1499-1514.
URIhttp://hdl.handle.net/2117/185390
DOI10.1111/coin.12317
ISSN1467-8640
Publisher versionhttps://onlinelibrary.wiley.com/doi/full/10.1111/coin.12317
Collections
Share: