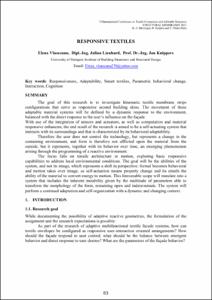 Show full item record
Vlasceanu, Elena
Lienhard, Julian
Knippers, Jan
Document typeConference report
PublisherCIMNE
Rights accessOpen Access
Abstract
The goal of this research is to investigate kinematic textile membrane strips configurations that serve as responsive second building skins. The movement of these adaptable material systems will be defined by a dynamic response to the environment, balanced with the direct response to the user’s influence on the façade. With use of the integration of sensors and actuators, as well as computation and material responsive enhancers, the end result of the research is aimed to be a self-actuating system that interacts with its surroundings and that is characterized by its behavioral adaptability. Therefore the user does not control the technology, but represents a change in the containing environment, and form is therefore not afflicted upon the material from the outside, but it represents, together with its behavior over time, an emerging phenomenon arising through the programming of a reactive environment. The focus falls on tensile architecture in motion, exploring basic responsive capabilities to address local environmental conditions. The goal will be the abilities of the system, and not its image, which represents a shift in perspective: formal becomes behavioral and motion takes over image, as self-actuation means property change and its entails the ability of the material to convert energy to motion. This foreseeable scope will translate into a system that includes the inherent instability given by the multitude of parameters able to transform the morphology of the form, remaining open and indeterminate. The system will perform a continual adaptation and self-organization with a dynamic and changing context.
URIhttp://hdl.handle.net/2117/185359
ISBN978-84-941686-0-4
Collections
Share: