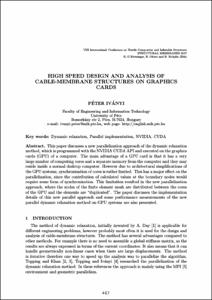 Show full item record
Iványi, Péter
Document typeConference report
PublisherCIMNE
Rights accessOpen Access
Abstract
This paper discusses a new parallelization approach of the dynamic relaxation method, which is programmed with the NVIDIA CUDA API and executed on the graphics cards (GPU) of a computer. The main advantage of a GPU card is that it has a very large number of computing cores and a separate memory from the computer and they may reside inside a normal desktop computer. However due to architectural simpliﬁcations of the GPU systems, synchronization of cores is rather limited. This has a major eﬀect on the parallelization, since the contribution of calculated values at the boundary nodes would require some form of synchronization. This limitation resulted in the new parallelization approach, where the nodes of the ﬁnite element mesh are distributed between the cores of the GPU and the elements are “duplicated”. The paper discusses the implementation details of this new parallel approach and some performance measurements of the new parallel dynamic relaxation method on GPU systems are also presented.
URIhttp://hdl.handle.net/2117/185260
ISBN978-84-946909-9-0
Collections
Share: