Numerical simulation of an air-supported structure in the air flow 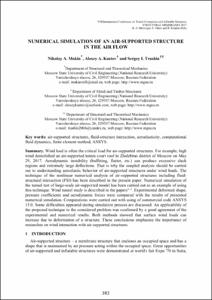 Show full item record
Mokin, Nikolay A.
Kustov, Alexey A.
Trushin, Sergey I.
Document typeConference report
PublisherCIMNE
Rights accessOpen Access
Abstract
Wind load is often the critical load for air-supported structures. For example, high wind demolished an air-supported tennis court roof in Zhulebino district of Moscow on May 29, 2017. Aerodynamic instability (buffeting, flutter, etc.) can produce excessive slack regions and extremely large deflections. That is why the coupled analysis should be carried out to understanding aeroelastic behavior of air-supported structures under wind loads. The technique of the nonlinear numerical analysis of air-supported structures including fluidstructural interaction (FSI) has been described in the present paper. Numerical simulation of the tunnel test of large-scale air-supported model has been carried out as an example of using this technique. Wind tunnel study is described in the papers1, 2. Experimental deformed shape, pressure coefficients and aerodynamic forces were compared with the results of presented numerical simulation. Computations were carried out with using of commercial code ANSYS 15.0. Some difficulties appeared during simulation process are discussed. An applicability of the proposed technique to the considered problem was confirmed by a good agreement of the experimental and numerical results. Both methods showed that surface wind loads can increase due to deformation of a structure. These conclusions emphasize the importance of researches on wind interaction with air-supported structures.
URIhttp://hdl.handle.net/2117/185220
ISBN978-84-946909-9-0
Collections
Share: