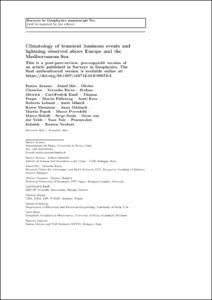 Except where otherwise noted, content on this work is licensed under a Creative Commons license : Attribution-NonCommercial-NoDerivs 3.0 Spain
Abstract
In 1999, the first sprites were observed above European thunderstorms using sensitive cameras. Since then, Eurosprite campaigns have been conducted to observe sprites and other transient luminous events (TLEs), expanding into a network covering large parts of Europe and coastal areas. In 2009 through 2013, the number of optical observations of TLEs reached a peak of 2000 per year. Because of this unprecedented number of European observations, it was possible to construct a climatology of 8394 TLEs observed above 1018 thunderstorm systems and study for the first time their distribution and seasonal cycle above Europe and parts of the Mediterranean Sea. The number of TLEs per thunderstorm was found to follow a power law, with less than 10 TLEs for 801 thunderstorms and up to 195 TLEs above the most prolific one. The majority of TLEs were classified as sprites, 641 elves, 280 halos, 70 upward lightning, 2 blue jets and 1 gigantic jet. The climatology shows intense TLE activity during summer over continental areas and in late autumn over coastal areas and sea. The two seasons peak, respectively, in August and November, separated by March and April with almost no TLEs, and a relative minimum around September. The observed TLE activity, i.e. mostly sprites, is shown to be largely consistent with lightning activity, with a 1/1000 of observed TLE-to-lightning ratio in regions with most observations. The overall behaviour is consistent among individual years, making the observed seasonal cycle a robust general feature of TLE activity above Europe.
CitationArnone, E. [et al.]. Climatology of transient luminous events and lightning observed above Europe and the Mediterranean Sea. "Surveys in geophysics", 4 Novembre 2019, vol. 41, p. 167-199.
URIhttp://hdl.handle.net/2117/185022
DOI10.1007/s10712-019-09573-5
ISSN0169-3298
Publisher versionhttps://link.springer.com/article/10.1007%2Fs10712-019-09573-5
Collections
Share: