Analysis of the lightning production of convective cells 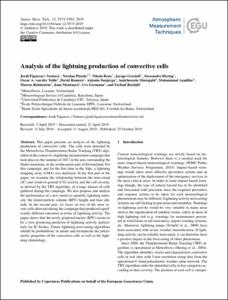 Salvo que se indique lo contrario, los contenidos de esta obra estan sujetos a la licencia de Creative Commons : Reconocimiento-NoComercial-SinObraDerivada 3.0 España
Resumen
This paper presents an analysis of the lightning production of convective cells. The cells were detected by the MeteoSwiss Thunderstorms Radar Tracking (TRT) algorithm in the course of a lightning measurement campaign that took place in the summer of 2017 in the area surrounding the Säntis mountain, in the northeastern part of Switzerland. For this campaign, and for the first time in the Alps, a lightning mapping array (LMA) was deployed. In the first part of the paper, we examine the relationship between the intra-cloud (IC) and cloud-to-ground (CG) activity and the cell severity, as derived by the TRT algorithm, of a large dataset of cells gathered during the campaign. We also propose and analyse the performance of a new metric to quantify lightning intensity, the rimed-particle column (RPC) height and base altitude. In the second part, we focus on two of the most severe cells detected during the campaign that produced significantly different outcomes in terms of lightning activity. The paper shows that the newly proposed metric (RPC) seems to be a very promising predictor of lightning activity, particularly for IC flashes. Future lightning nowcasting algorithms should be probabilistic in nature and incorporate the polarimetric properties of the convective cells as well as the lightning climatology.
CitaciónFigueras, J. [et al.]. Analysis of the lightning production of convective cells. "Atmospheric measurement techniques", 22 Octubre 2019, vol. 12, núm. 10, p. 5573-5591.
URIhttp://hdl.handle.net/2117/185019
DOI10.5194/amt-12-5573-2019
ISSN1867-1381
Versión del editorhttps://www.atmos-meas-tech.net/12/5573/2019/
Colecciones
Comparte: