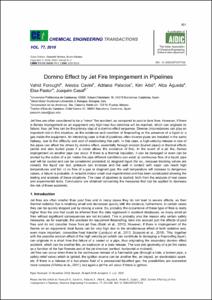 Document typeArticle
Rights accessOpen Access
Abstract
Jet fires are often considered to be a minor fire accident, as compared to pool or tank fires. However, if there is flames impingement on an equipment very high heat flux densities will be reached, which can originate its failure; thus, jet fires can be the primary step of a domino effect sequence. Diverse circumstances can play an important role in this situation, as the existence and condition of fireproofing or the presence of a liquid or a gas inside the equipment. An interesting case is that of pipelines; often diverse pipes are installed in the same hallway, due to the difficulty and cost of establishing this path. In this case, a high-velocity release in one of the pipes can affect the others by domino effect, essentially through erosion (buried pipes) or thermal effects (aerial and also buried pipes if a crater allows the existence of fire). In the event of a jet fire, flames impingement on another pipe can occur. If there is a thermal insulation, it can be damaged or even can be eroded by the action of a jet. Inside the pipe different conditions can exist: a) continuous flow of a liquid: pipe wall will be cooled and can be considered protected; b) stagnant liquid (for ex., because blocking valves are closed): the liquid can boil, pressure can increase and the wall in contact with vapor can reach high temperatures and fail; c) co flow of a gas or stagnant gas: the wall temperature will increase to dangerous values, a failure is probable. A versatile indoor small size experimental unit has been constructed allowing the testing and analysis of these situations. The case of pipelines is studied, both from the analysis of real cases and experimental tests. Conclusions are obtained concerning the measures that can be applied to decrease the risk of these accidents.
CitationForoughi, V. [et al.]. Domino effect by jet fire impingement in pipelines. "Chemical engineering transactions", 1 Gener 2019, vol. 77, p. 931-936.
URIhttp://hdl.handle.net/2117/185016
DOI10.3303/CET1977156
ISSN2283-9216
Publisher versionhttps://www.aidic.it/cet/19/77/156.pdf
Collections
Share: