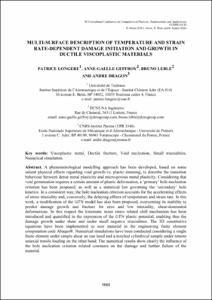 Show full item record
Longere, Patrice
Geffroy, Anne-Gaelle
Leble, Bruno
Dragon, Andre
Document typeConference report
PublisherCIMNE
Rights accessOpen Access
All rights reserved. This work is protected by the corresponding intellectual and industrial property rights. Without prejudice to any existing legal exemptions, reproduction, distribution, public communication or transformation of this work are prohibited without permission of the copyright holder
Abstract
A phenomenological modelling approach has been developed, based on some salient physical effects regarding void growth vs. plastic straining, to describe the transition behaviour between dense metal plasticity and micro-porous metal plasticity. Considering that void germination requires a certain amount of plastic deformation, a ‘primary’ hole nucleation criterion has been proposed, as well as a statistical law governing the ‘secondary’ hole kinetics. In a consistent way, the hole nucleation criterion accounts for the accelerating effects of stress triaxiality and, conversely, the delaying effects of temperature and strain rate. In this work, a modification of the GTN model has also been proposed, overcoming its inability to predict damage growth and fracture for zero and low triaxiality, shear-dominated deformations. In this respect the kinematic mean stress related shift mechanism has been introduced and quantified in the expression of the GTN plastic potential, enabling thus the damage growth under shear and under small negative triaxialities. The 3D constitutive equations have been implemented as user material in the engineering finite element computation code Abaqus®. Numerical simulations have been conducted considering a single finite element under simple shear on one hand and a notched cylindrical sample under remote uniaxial tensile loading on the other hand. The numerical results show clearly the influence of the hole nucleation criterion related constants on the damage and further failure of the material.
CitationLongere, P. [et al.]. Multi-surface description of temperature and strain rate-dependent damage initiation and growth in ductile viscoplastic materials. A: COMPLAS XI. "COMPLAS XI : proceedings of the XI International Conference on Computational Plasticity : fundamentals and applications". CIMNE, 2011, p. 1649-1660.
URIhttp://hdl.handle.net/2117/184884
ISBN978-84-89925-73-1
Collections
Share: