About (k,l)-kernels, semikernels and Grundy functions in partial line digraphs 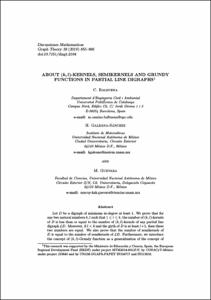