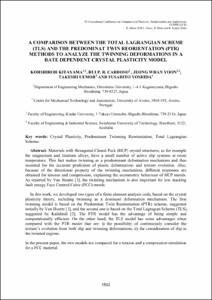 Show full item record
Kitayama, Kohshiroh
Cardoso, Rui P.R.
Yoon, Jeong Whan
Uemor, Takeshi
Yoshida, Fusahito
Document typeConference report
PublisherCIMNE
Rights accessOpen Access
Abstract
Materials with Hexagonal-Closed Pack (HCP) crystal structures, as for example the magnesium and titanium alloys, have a small number of active slip systems at room temperature. This fact makes twinning as a predominant deformation mechanism and thus essential for the accurate prediction of plastic deformations and texture evolution. Also, because of the directional property of the twinning mechanism, different responses are obtained for tension and compression, explaining the asymmetric behaviour of HCP metals. As reported by Van Houtte [1], the twinning mechanism is also important for low stacking fault energy Face Centred Cubic (FCC) metals. In this work, we developed two types of a finite element analysis code, based on the crystal plasticity theory, including twinning as a dominant deformation mechanism. The first twinning model is based on the Predominat Twin Reorientation (PTR) scheme, suggested initially by Van Houtte [1], and the second one is based on the Total Lagragian Scheme (TLS), suggested by Kalidindi [2]. The PTR model has the advantage of being simple and computationally efficient. On the other hand, the TLS model has some advantages when compared with the PTR model that are: i) the possibility of continuously consider the texture’s evolution from both slip and twinning deformations; ii) the consideration of slip in the twinned regions. In the present paper, the two models are compared for a tension and a compression simulation for a FCC material.
CitationKitayama, K. [et al.]. A comparison between the total lagrangian scheme (TLS) and the predominat twin reorientation (PTR) methods to analyze the twinning deformations in a rate dependent crystal plasticity model. A: COMPLAS XI. "COMPLAS XI : proceedings of the XI International Conference on Computational Plasticity : fundamentals and applications". CIMNE, 2011, p. 1502-1508.
URIhttp://hdl.handle.net/2117/184516
ISBN978-84-89925-73-1
Collections
Share: