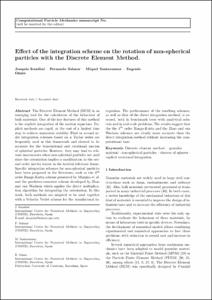 Document typeArticle
PublisherSpringer
Rights accessOpen Access
Abstract
The discrete element method (DEM) is an emerging tool for the calculation of the behaviour of bulk materials. One of the key features of this method is the explicit integration of the motion equations. Explicit methods are rapid, at the cost of a limited time step to achieve numerical stability. First- or second-order integration schemes based on a Taylor series are frequently used in this framework and shown to be accurate for the translational and rotational motion of spherical particles. However, they may lead to relevant inaccuracies when non-spherical particles are used since the orientation implies a modification in the second-order inertia tensor in the inertial reference frame. Specific integration schemes for non-spherical particles have been proposed in the literature, such as the fourth-order Runge–Kutta scheme presented by Munjiza et al. and the predictor–corrector scheme developed by Zhao and van Wachem which applies the direct multiplication algorithm for integrating the orientation. In this work, both methods are adapted to be used together with a velocity Verlet scheme for the translational integration. The performance of the resulting schemes, as well as that of the direct integration method, is assessed, both in benchmark tests with analytical solution and in real-scale problems. The results suggest that the fourth-order Runge–Kutta and the Zhao and van Wachem schemes are clearly more accurate than the direct integration method without increasing the computational time.
CitationIrazábal, J. [et al.]. Effect of the integration scheme on the rotation of non-spherical particles with the discrete element method. "Computational particle mechanics", Octubre 2019, vol. 6, núm. 4, p. 545-559.
URIhttp://hdl.handle.net/2117/184377
DOI10.1007/s40571-019-00232-5
ISSN2196-4386
Publisher versionhttps://link.springer.com/article/10.1007/s40571-019-00232-5
Collections
Share: