A compositional analysis approach assessing the spatial distribution of trees in Guadalajara, Mexico 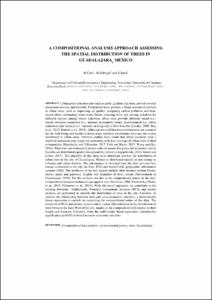 Document typeConference report
PublisherUniversità di Cassino e del Lazio Meridionale
Rights accessOpen Access
All rights reserved. This work is protected by the corresponding intellectual and industrial property rights. Without prejudice to any existing legal exemptions, reproduction, distribution, public communication or transformation of this work are prohibited without permission of the copyright holder
Abstract
Urban green infrastructure such as parks, gardens and trees, provide several ecosystem services and benefits. Particularly trees provide a broad amount of services in urban areas, such as improving air quality, mitigating carbon pollution and heat-island effect, attenuating storm-water floods, reducing noise and serving as habitat for different species among others. Likewise, urban trees provide different social (i.e., social cohesion), economic (i.e., increase in property value), psychological (i.e., stress reduction) and medical (i.e., increase in longevity of life) benefits (Landry, 2009; Roy et al., 2012; Battisti et al., 2019). Although it is well documented that trees are essential for the well-being and health of urban areas and their inhabitants, trees are not evenly distributed in urban areas. Previous studies have found that urban residents with a deprived socioeconomic status are associated with low coverage of urban trees in their communities (Hernández and Villaseñor, 2017; Park and Kwan, 2017; Wang and Qiu, 2018). Therefore, environmental justice seeks to ensure that green infrastructure and its benefits are distributed equally throughout the territory (Anguelovski, 2013; Gould and Lewis, 2017). The objective of this study is to determine whether the distribution of urban trees in the city of Guadalajara, Mexico is distributed equally or not among its colonies and urban districts. The information is obtained from the first and only tree census conducted in the city on June 2018 and treated with geographic information systems (GIS). The attributes of the tree dataset include their location (urban blocks, streets, parks and gardens), heights and diameters of their canopy (Government of Guadalajara, 2019). For the analysis and due to the compositional nature of the data, compositional analysis techniques are applied (see Aitchison, 1986; Pawlowsky-Glahn, et al., 2015; Filzmoser et al., 2018). With this novel approach, we contribute to the existing literature. Additionally, Principal Component Analysis (PCA) and cluster analysis are performed to identify the distribution of trees in the city. Likewise, to observe the relationship between trees and socio-economic variables, a multivariable linear regression is carried out respecting the compositional nature of the data. The results from PCA and cluster analysis show a clear differentiation in the distribution of trees between the East-West of the city, mainly in the compositions with respect to their height and diameter. Likewise, from the multivariate linear regression, considerable significance (p<0.05) is found in socio-economic variables
Location
1: Guadalajara, Jalisco, Mèxic
CitationCruz, M.; Ortego, M.I.; Roca, E. A compositional analysis approach assessing the spatial distribution of trees in Guadalajara, Mexico. A: Scientific Meeting Classification and Data Analysis Group. "Cladag 2019: book of short papers". Università di Cassino e del Lazio Meridionale, 2019, p. 140-141.
URIhttp://hdl.handle.net/2117/184350
ISBN978-88-8317-108-6
Publisher versionhttp://cea.unicas.it/e_book/Porzio.pdf
Other identifiershttp://cladag2019.unicas.it/book-of-abstracts/
Collections
Share: