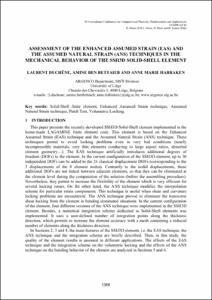 Show full item record
Duchene, Laurent
Bettaieb, Amine Ben
Habraken, Anne Marie
Document typeConference report
PublisherCIMNE
Rights accessOpen Access
Abstract
This paper presents the recently developed SSH3D Solid-Shell element implemented in the home-made LAGAMINE finite element code. This element is based on the Enhanced Assumed Strain (EAS) technique and the Assumed Natural Strain (ANS) technique. These techniques permit to avoid locking problems even in very bad conditions (nearly incompressible materials, very thin elements conducting to large aspect ratios, distorted element geometry…). The EAS technique artificially introduces additional degrees of freedom (DOFs) to the element. In the current configuration of the SSH3D element, up to 30 independent DOFs can be added to the 24 classical displacement DOFs (corresponding to the 3 displacements of the 8 element nodes). Contrarily to the nodal displacements, these additional DOFs are not linked between adjacent elements, so that they can be eliminated at the element level during the computation of the solution (before the assembling procedure). Nevertheless, they permit to increase the flexibility of the element which is very efficient for several locking issues. On the other hand, the ANS technique modifies the interpolation scheme for particular strain components. This technique is useful when shear and curvature locking problems are encountered. The ANS technique proved to eliminate the transverse shear locking from the element in bending dominated situations. In the current configuration of the element, four different versions of the ANS technique were implemented in the SSH3D element. Besides, a numerical integration scheme dedicated to Solid-Shell elements was implemented. It uses a user-defined number of integration points along the thickness direction, which permits to increase the element accuracy with a mesh containing a reduced number of elements along the thickness direction. In Sections 2, 3 and 4, the main features of the SSH3D element, i.e. the EAS technique, the ANS technique and the integration scheme are briefly described. Then, in this study, the quality of the element results is assessed in different applications. The effects of the EAS technique and the integration scheme on the volumetric locking and the effects of the ANS technique on the bending behavior of the element are analyzed in Sections 5 and 6.
CitationDuchene, L.; Bettaieb, A. B.; Habraken, A. M. Assessment of the enhanced assumed strain (eas) and the assumed natural strain (ans) techniques in the mechanical behavior of the SSH3D solid-shell element. A: COMPLAS XI. "COMPLAS XI : proceedings of the XI International Conference on Computational Plasticity : fundamentals and applications". CIMNE, 2011, p. 1368-1379.
URIhttp://hdl.handle.net/2117/184289
ISBN978-84-89925-73-1
Collections
Share: