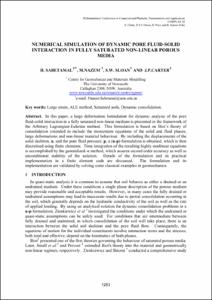 Show full item record
Sabetamal, H.
Nazem, M.
Sloan, S. W.
Carter, J. P.
Document typeConference report
PublisherCIMNE
Rights accessOpen Access
All rights reserved. This work is protected by the corresponding intellectual and industrial property rights. Without prejudice to any existing legal exemptions, reproduction, distribution, public communication or transformation of this work are prohibited without permission of the copyright holder
Abstract
In this paper, a large deformation formulation for dynamic analysis of the pore fluid-solid interaction in a fully saturated non-linear medium is presented in the framework of the Arbitrary Lagrangian-Eulerian method. This formulation is based on Biot’s theory of consolidation extended to include the momentum equations of the solid and fluid phases, large deformations and non-linear material behaviour. By including the displacements of the solid skeleton, u, and the pore fluid pressure, p, a (u-p) formulation is obtained, which is then discretised using finite elements. Time integration of the resulting highly nonlinear equations is accomplished by the generalized–α method, which assures second order accuracy as well as unconditional stability of the solution. Details of the formulation and its practical implementation in a finite element code are discussed. The formulation and its implementation are validated by solving some classical examples in geomechanics.
CitationSabetamal, H. [et al.]. Numerical simulation of dynamic pore fluid-solid interaction in fully saturated non-linear porous media. A: COMPLAS XI. "COMPLAS XI : proceedings of the XI International Conference on Computational Plasticity : fundamentals and applications". CIMNE, 2011, p. 1263-1273.
URIhttp://hdl.handle.net/2117/184229
ISBN978-84-89925-73-1
Collections
Share: