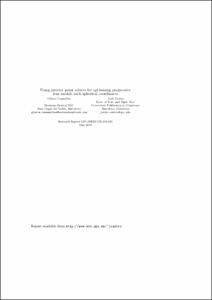 Document typeResearch report
Rights accessOpen Access
Abstract
Designing progressive lenses is a complex problem that has beenpreviously solved by formulating an optimization model based on Cartesiancoordinates. In this work a new progressive lens model using spherical co-ordinates is presented, and interior point solvers are used to solve this newoptimization model. Although this results in a highly nonlinear, nonconvex,continuous optimization problem, the new spherical coordinates model exhibitsbetter convexity properties compared to previous ones based on Cartesian co-ordinates. The real-world instances considered gave rise to nonlinear optimiza-tion problems of about 900 variables and 15000 constraints. Each constraintcorresponds to a point of the grid used to define the lens surface. The numberof variables depends on the precision of a B-spline basis used for the repre-sentation of the surface, and the number of constraints depends on the shapeand quality of the design. We present results of progressive lenses obtainedusing the AMPL modeling language and the nonlinear interior point solversIPOPT, LOQO and KNITRO. Computational results are reported, as wellas some examples of real-world progressive lenses calculated using this newmodel. Progressive lenses obtained are competitive in terms of quality withthose resulting from previous models that are used in commercial glasses.
Description
Research Report UPC-DEIO DR 2019
CitationCasanellas, G.; Castro, J. "Using interior point solvers for optimizing progressive lens models with spherical coordinates". 2019.
URIhttp://hdl.handle.net/2117/184218
URL other repositoryhttp://www-eio.upc.edu/~jcastro/publications/reports/dr2019-01.pdf
Collections
Share: