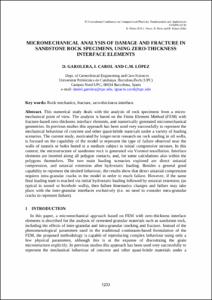 Document typeConference report
PublisherCIMNE
Rights accessOpen Access
Abstract
This numerical study deals with the analysis of rock specimens from a micromechanical point of view. The analysis is based on the Finite Element Method (FEM) with fracture-based zero-thickness interface elements, and numerically generated micromechanical geometries. In previous studies this approach has been used very successfully to represent the mechanical behaviour of concrete and other quasi-brittle materials under a variety of loading scenarios. The current study, motivated by longer-term research on rock sanding in oil wells, is focused on the capability of the model to represent the type of failure observed near the walls of tunnels or holes bored in a medium subject to initial compressive stresses. In this context, the microstructure of sandstone rock is generated via Voronoi tessellation. Interface elements are inserted along all polygon contacts, and, for some calculations also within the polygons themselves. The two main loading scenarios explored are direct uniaxial compression, and uniaxial extension after hydrostatic loading. Besides a general good capability to represent the desired behaviour, the results show that direct uniaxial compression requires intra-granular cracks in the model in order to reach failure. However, if the same final loading state is reached via initial hydrostatic loading followed by uniaxial extension, (as typical in tunnel or borehole walls), then failure kinematics changes and failure may take place with the inter-granular interfaces exclusively (i.e. no need to consider intra-granular cracks to represent failure).
CitationGarolera Vinent, D.; Carol, I.; López Garello, C. M. Micromechanical analysis of damage and fracture in sandstone rock specimens, using zero-thickness interface elements. A: COMPLAS XI. "COMPLAS XI : proceedings of the XI International Conference on Computational Plasticity : fundamentals and applications". CIMNE, 2011, p. 1222-1243.
URIhttp://hdl.handle.net/2117/184204
ISBN978-84-89925-73-1
Collections
Share: