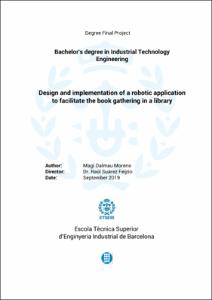 This project contributes to solve the necessity of automating the gathering of the books in a library. In order to achieve this goal, a robotic solution is designed, implemented and tested. This solution is based on computer vision, strategic object-manipulation, autonomous navigation and intelligent motion-planning. This project solves in particular the following task. The robot, placed in some point of a previously mapped room, gets a human order to get a book from the table in the room. Then, the robot navigates autonomously to a predefined position in front of the table and the robot detects the book. If the book is there and it is reachable by the robot from its current position, the robot calculates the proper path to pick the book off the table. Once the book has been picked, the robot returns to the initial position and offers the book to the human user, releasing it when detecting the user has grasped the book. It is important to highlight that the project focuses on the manipulation of the book and its localization through ArUco markers. The developed algorithm that controls the robot is implemented in the class-oriented programming languages C++ and Python and it is mainly based on the Robot Operating System (ROS) framework. The robot TIAGo from PAL Robotics has been chosen to test the developed solution, both in simulated and real scenarios. As a result of this project, a robot is able to calculate how it should alter the orientation and position of a book on a table in order to make the task of grasping with a parallel gripper possible. It is suggested to go further in this line by making the approach more robust to the presence of obstacles
SubjectsRobotics, Computer vision, Libraries, Robòtica, Visió per ordinador, Biblioteques -- Innovacions tecnològiques
URIhttp://hdl.handle.net/2117/184008