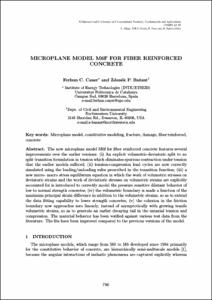 Bazant, Znedek P.
Document typeConference report
PublisherCIMNE
Rights accessOpen Access
Abstract
The new microplane model M6f for ﬁber reinforced concrete features several improvements over the earlier versions: (i) An explicit volumetric-deviatoric split to no split transition formulation in tension which eliminates spurious contraction under tension that the earlier models suﬀered; (ii) tension-compression load cycles are now correctly simulated using the loading/unloading rules prescribed in the transition function; (iii) a new micro- macro stress equilibrium equation in which the work of volumetric stresses on deviatoric strains and the work of deviatioric stresses on volumetric strains are explicitly accounted for is introduced to correctly model the pressure sensitive dilatant behavior of low to normal strength concretes; (iv) the volumetric boundary is made a function of the maximum principal strain diﬀerence in addition to the volumetric strains, so as to extend the data ﬁtting capability to lower strength concretes; (v) the cohesion in the friction boundary now approaches zero linearly, instead of asymptotically with growing tensile volumetric strains, so as to generate an earlier decaying tail in the uniaxial tension and compression. The material behavior has been veriﬁed against various test data from the literature. The ﬁts have been improved compared to the previous versions of the model.
CitationCaner, F. C.; Bazant, Z. P. Microplane model M6F for fiber reinforced concrete. A: COMPLAS XI. "COMPLAS XI : proceedings of the XI International Conference on Computational Plasticity : fundamentals and applications". CIMNE, 2011, p. 796-807.
URIhttp://hdl.handle.net/2117/183946
ISBN978-84-89925-73-1
Collections
Share: