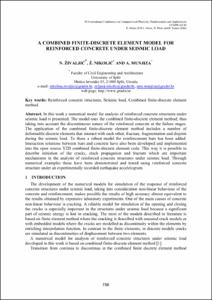 Show full item record
Zivaljic, N.
Nikolic, Z.
Munjiza, A.
Document typeConference report
PublisherCIMNE
Rights accessOpen Access
All rights reserved. This work is protected by the corresponding intellectual and industrial property rights. Without prejudice to any existing legal exemptions, reproduction, distribution, public communication or transformation of this work are prohibited without permission of the copyright holder
Abstract
In this work a numerical model for analysis of reinforced concrete structures under seismic load is presented. The model uses the combined finite-discrete element method; thus taking into account the discontinuous nature of the reinforced concrete at the failure stages. The application of the combined finite-discrete element method includes a number of deformable discrete elements that interact with each other, fracture, fragmentation and disjoint during the seismic load. To these a robust model for reinforcement bars has been added. Interaction solutions between bars and concrete have also been developed and implemented into the open source Y2D combined finite-discrete element code. This way it is possible to describe initiation of the cracks, crack propagation and fracture which are important mechanisms in the analysis of reinforced concrete structures under seismic load. Through numerical examples these have been demonstrated and tested using reinforced concrete structure under an experimentally recorded earthquake accelelogram.
CitationZivaljic, N.; Nikolic, Z.; Munjiza, A. A combined finite-discrete element model for reinforced concrete under seismic load. A: COMPLAS XI. "COMPLAS XI : proceedings of the XI International Conference on Computational Plasticity : fundamentals and applications". CIMNE, 2011, p. 788-795.
URIhttp://hdl.handle.net/2117/183943
ISBN978-84-89925-73-1
Collections
Share: