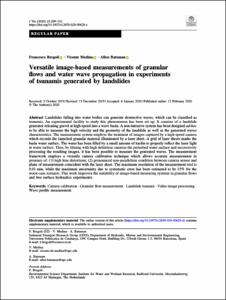 Document typeArticle
Rights accessOpen Access
Abstract
Landslides falling into water bodies can generate destructive waves, which can be classified as tsunamis. An experimental facility to study this phenomenon has been set up. It consists of a landslidegenerator releasing gravel at high-speed into a wave basin. A non-intrusive system has been designed ad-hocto be able to measure the high velocity and the geometry of the landslide as well as the generated waves characteristics. The measurement system employs the treatment of images captured by a high-speed camera which records the launched granular material illuminated by a laser sheet. A grid of laser sheets marks thebasin water surface. The water has been filled by a small amount of kaolin to properly reflect the laser lightat water surface. Thus, by filming with high definition cameras the perturbed water surface and successively processing the resulting images, it has been possible to measure the generated waves. The measurement framework employs a versatile camera calibration technique which allows accurate measurements in presence of: (1) high lens distortions; (2) pronounced non-parallelism condition between camera sensor and plane of measurement coincident with the laser sheet. The maximum resolution of the measurement tool is0.01 mm, while the maximum uncertainty due to systematic error has been estimated to be 15% for theworst-case scenario. This work improves the suitability of image-based measuring systems in granular flows and free surface hydraulics experiments
CitationBregoli, F.; De Medina, V.; Bateman, A. Versatile image-based measurements of granular flows and water wave propagation in experiments of tsunamis generated by landslides. "Journal of visualization", 1 Abril 2020, vol. 23, núm. 2, p. 299-311.
URIhttp://hdl.handle.net/2117/183898
DOI10.1007/s12650-020-00628-z
ISSN1343-8875
Publisher versionhttps://link.springer.com/article/10.1007/s12650-020-00628-z
Collections
Share: