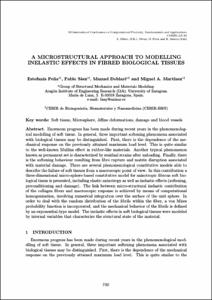 Show full item record
Peña, Estefanía
Sáez, Pablo
Doblaré, Manuel
Martínez, Miguel A.
Document typeConference report
PublisherCIMNE
Rights accessOpen Access
Abstract
Enormous progress has been made during recent years in the phenomenological modelling of soft tissue. In general, three important softening phenomena associated with biological tissues may be distinguished. First, there is the dependence of the mechanical response on the previously attained maximum load level. This is quite similar to the well-known Mullins eﬀect in rubber-like materials. Another typical phenomenon known as permanent set is characterized by residual strains after unloading. Finally, there is the softening behaviour resulting from ﬁbre rupture and matrix disruption associated with material damage. There are several phenomenological constitutive models able to describe the failure of soft tissues from a macroscopic point of view. In this contribution a three-dimensional micro-sphere-based constitutive model for anisotropic ﬁbrous soft biological tissue is presented, including elastic anisotropy as well as inelastic eﬀects (softening, preconditioning and damage). The link between micro-structural inelastic contribution of the collagen ﬁbers and macroscopic response is achieved by means of computational homogenization, involving numerical integration over the surface of the unit sphere. In order to deal with the random distribution of the ﬁbrils within the ﬁber, a von Mises probability function is incorporated, and the mechanical behavior of the ﬁbrils is deﬁned by an exponential-type model. The inelastic eﬀects in soft biological tissues were modeled by internal variables that characterize the structural state of the material.
CitationPeña, E. [et al.]. A microstructural approach to modelling inelastic effects in fibred biological tissues. A: COMPLAS XI. "COMPLAS XI : proceedings of the XI International Conference on Computational Plasticity : fundamentals and applications". CIMNE, 2011, p. 700-712.
URIhttp://hdl.handle.net/2117/183829
ISBN978-84-89925-73-1
Collections
Share: