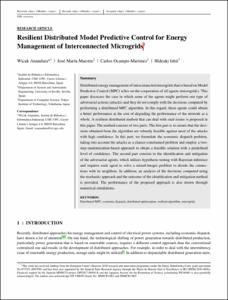 Ishii, Hideaki
Document typeArticle
Rights accessOpen Access
European Commission's projectINCITE - Innovative controls for renewable sources Integration into smart energy systems (EC-H2020-675318)
Abstract
Distributed energy management of interconnected microgrids that is based on Model Predictive Control (MPC) relies on the cooperation of all agents (microgrids). This paper discusses the case in which some of the agents might perform one type of adversarial actions (attacks) and they do not comply with the decisions computed by performing a distributed MPC algorithm. In this regard, these agents could obtain a better performance at the cost of degrading the performance of the network as a whole. A resilient distributed method that can deal with such issues is proposed in this paper. The method consists of two parts. The first part is to ensure that the decisions obtained from the algorithm are robustly feasible against most of the attacks with high confidence. In this part, we formulate the economic dispatch problem, taking into account the attacks as a chance-constrained problem and employ a two-step randomization-based approach to obtain a feasible solution with a predefined level of confidence. The second part consists in the identification and mitigation of the adversarial agents, which utilizes hypothesis testing with Bayesian inference and requires each agent to solve a mixed-integer problem to decide the connections with its neighbors. In addition, an analysis of the decisions computed using the stochastic approach and the outcome of the identification and mitigation method is provided. The performance of the proposed approach is also shown through numerical simulations.
CitationAnanduta, W. [et al.]. Resilient distributed model predictive control for energy management of interconnected microgrids. "Optimal control applications and methods", 1 Gener 2019, vol. 41, núm. 1, p. 146-169.
URIhttp://hdl.handle.net/2117/183813
DOI10.1002/oca.2534
ISSN0143-2087
Publisher versionhttps://onlinelibrary.wiley.com/doi/abs/10.1002/oca.2534
Collections
Share: