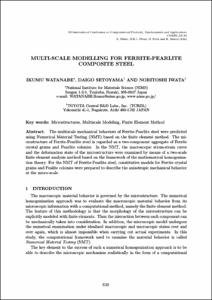 Show full item record
Watanabe, Ikumu
Setoyama, Daigo
Iwata, Noritoshi
Document typeConference report
PublisherCIMNE
Rights accessOpen Access
Abstract
The multiscale mechanical behaviors of Ferrite-Pearlite steel were predicted using Numerical Material Testing (NMT) based on the ﬁnite element method. The microstructure of Ferrite-Pearlite steel is regarded as a two-component aggregate of Ferrite crystal grains and Pearlite colonies. In the NMT, the macroscopic stress-strain curve and the deformation state of the microstructure were examined by means of a two-scale ﬁnite element analysis method based on the framework of the mathematical homogenization theory. For the NMT of Ferrite-Pearlite steel, constitutive models for Ferrite crystal grains and Pealite colonies were prepared to describe the anisotropic mechanical behavior at the micro-scale.
CitationWatanabe, I.; Setoyama, D.; Iwata, N. Multi-scale modelling for ferrite-pearlite composite steel. A: COMPLAS XI. "COMPLAS XI : proceedings of the XI International Conference on Computational Plasticity : fundamentals and applications". CIMNE, 2011, p. 630-641.
URIhttp://hdl.handle.net/2117/183789
ISBN978-84-89925-73-1
Collections
Share: