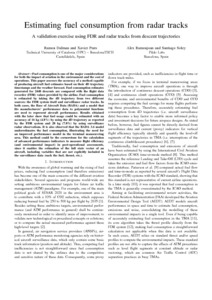 Except where otherwise noted, content on this work is licensed under a Creative Commons license : Attribution-NonCommercial-NoDerivs 3.0 Spain
Abstract
Fuel consumption is one of the major considerations for both the impact of aviation in the environment and the cost of operations. This paper assesses the accuracy of a method capable of producing aircraft fuel estimates based on their 4D trajectory timestamps and the weather forecast. Fuel consumption estimates generated for 2448 descents are compared with the flight data recorder (FDR) values provided by the airline. Fuel consumption is estimated by taking the 4D trajectory from two different sources: the FDR system itself and surveillance radar tracks. In both cases, the Base of Aircraft Data (BADA) and a model that fits manufacturers’ performance data to polynomial functions are used to represent aircraft performance. Results obtained with the latter show that fuel usage could be estimated with an accuracy of 16 kg (4.8%) using the 4D trajectory as reported by the FDR system and 28 kg (7.8%) using surveillance radar observations. It is also observed that the BADA 3.6 model underestimates the fuel consumption, illustrating the need for an improved performance model in the terminal manoeuvring area. This method could be the cornerstone for the calculation of advanced performance indicators to measure flight efficiency (and environmental impact) in post-operational assessments, since it enables the estimation of the full state vector of an aircraft, including variables that are not explicitly included in the surveillance data (such the fuel, thrust, etc.).
CitationDalmau, R. [et al.]. Estimating fuel consumption from radar tracks: a validation exercise using FDR and radar tracks from descent trajectories. "CEAS Aeronautical Journal", 19 Febrer 2020.
URIhttp://hdl.handle.net/2117/183452
DOI10.1007/s13272-020-00441-2
ISSN1869-5582
Publisher versionhttps://link.springer.com/article/10.1007/s13272-020-00441-2
Collections
Share: