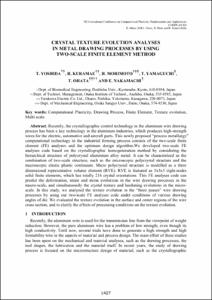 Show full item record
Yoshida, T.
Kuramae, H.
Morimoto, H.
Yamaguchi, T.
Ohata, T.
Nakamachi, E.
Document typeConference report
PublisherCIMNE
Rights accessOpen Access
All rights reserved. This work is protected by the corresponding intellectual and industrial property rights. Without prejudice to any existing legal exemptions, reproduction, distribution, public communication or transformation of this work are prohibited without permission of the copyright holder
Abstract
Recently, the crystallographic control technology in the aluminum wire drawing process has been a key technology in the aluminum industries, which produces high-strength wires for the electric, automotive and aircraft parts. This newly proposed “process metallurgy” computational technology in the industrial forming process consists of the two-scale finite element (FE) analyses and the optimum design algorithm.We developed two-scale FE analyses code based on the crystallographic homogenization method by considering the hierarchical structure of polycrystal aluminium alloy metal. It can be characterized as the combination of two-scale structure, such as the microscopic polycrystal structure and the macroscopic elastic plastic continuum. Micro polycrystal structure is modelled as a three dimensional representative volume element (RVE). RVE is featured as 3x3x3 eight-nodes solid finite elements, which has totally 216 crystal orientations. This FE analyses code can predict the deformation, strain and stress evolutions in the wire drawing processes in the macro-scale, and simultaneously the crystal texture and hardening evolutions in the micro-scale. In this study, we analyzed the texture evolution in the “three passes” wire drawing processes by using our two-scale FE analyses code under conditions of various drawing angles of die. We evaluated the texture evolution in the surface and center regions of the wire cross section, and to clarify the effects of processing conditions on the texture evolution.
URIhttp://hdl.handle.net/2117/183444
ISBN978-84-941531-5-0
Collections
Share: