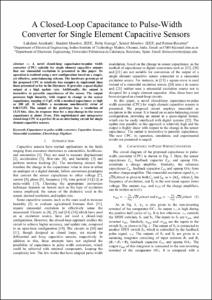 Document typeConference report
Rights accessOpen Access
Abstract
A novel closed-loop capacitance-to-pulse width converter (CPC) suitable for single element capacitive sensors that use sinusoidal excitation is presented in this paper. Its operation is realized using a new configuration based on a simple, yet effective, auto-balancing scheme. The hardware prototype of the proposed CPC is relatively less complex to implement than those presented so far in the literature. It provides a quasi-digital output at a high update rate. Additionally, the output is insensitive to parasitic capacitances of the sensor. The output possesses high linearity, with respect to change in the sensor capacitance, ranging +/-5 pF, with a nominal capacitance as high as 200 pF. It exhibits a maximum non-linearity error of 0.061%FS. The output of the prototype has a resolution of 13.31 bits. Also, its response time for a step-change in the sensor capacitance is about 13 ms. This sophisticated and inexpensive closed-loop CPC is a perfect fit as an interfacing circuit for single element capacitive sensors.
CitationAreekath, L.; George, B.; Reverter, F. A Closed-loop capacitance to pulse-width converter for single element capacitive sensors. A: CST 2019: 13th International Conference on Sensing Technology: Sydney, Australia: 2–4 December 2019, p. 89-93.
URIhttp://hdl.handle.net/2117/183435
Collections
Share: