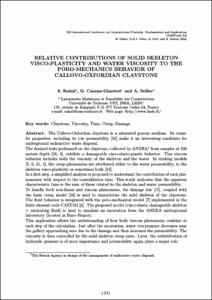 Show full item record
Rahal, S.
Casaux-Ginestet, G.
Sellier, A.
Document typeConference report
PublisherCIMNE
Rights accessOpen Access
Abstract
The Callovo-Oxfordian claystone is a saturated porous medium. Its transfer properties, including its low permeability [16] make it an interesting candidate for underground radioactive waste disposal. The drained tests performed on the claystone, collected by ANDRA1 from samples at 500 meters depth [16, 9], exhibits a damageable visco-elasto-plastic behavior. This viscous behavior includes both the viscosity of the skeleton and the water. In existing models [5, 6, 11, 1], the creep phenomena are attributed either to the water permeability, to the skeleton visco-plasticity or sometimes both [13]. In a first step, a simplified analysis is proposed to understand the contribution of each phenomenon with respect to the consolidation time. This study indicates that the apparent characteristic time is the sum of those related to the skeleton and water permeability. To handle both non-linear and viscous phenomena, the damage law [15], coupled with the basic creep model [14] is used to characterize the solid skeleton of the claystone. The fluid behavior is integrated with the poro-mechanical model [7] implemented in the finite element code CAST3M [4]. The proposed model (visco-elastic damageable skeleton + saturating fluid) is used to simulate an excavation from the ANDRA underground laboratory (located in Bure–France). This application allows the understanding of how both viscous phenomena combine at each step of the calculation. Just after the excavation, water overpressure decreases near the gallery approaching zero due to the damage and then increases the permeability. The viscosity is then controlled by the solid skeleton creep rates. Later, the redistribution of hydraulic pressure is of more importance and permeability again plays a major role.
URIhttp://hdl.handle.net/2117/183398
ISBN978-84-941531-5-0
Collections
Share: