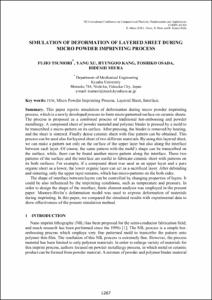 Show full item record
Tsumori, Fujio
Xu, Yang
Kang, Hyungoo
Osada, Toshiko
Miura, Hideshi
Document typeConference report
PublisherCIMNE
Rights accessOpen Access
All rights reserved. This work is protected by the corresponding intellectual and industrial property rights. Without prejudice to any existing legal exemptions, reproduction, distribution, public communication or transformation of this work are prohibited without permission of the copyright holder
Abstract
This paper reports simulation of deformation during micro powder imprinting process, which is a newly developed process to form micro patterned surface on ceramic sheets. The process is proposed as a combined process of traditional hot-embossing and powder metallurgy. A compound sheet of powder material and polymer binder is pressed by a mold to be transcribed a micro-pattern on its surface. After pressing, the binder is removed by heating, and the sheet is sintered. Finally dense ceramic sheet with fine pattern can be obtained. This process can be used also for layered sheet of two different materials. By using this layered sheet, we can make a pattern not only on the surface of the upper layer but also along the interface between each layer. Of course, the same pattern with the mold’s shape can be transcribed on the surface, while, there can be found another micro pattern along the interface. These two patterns of the surface and the interface are useful to fabricate ceramic sheet with patterns on its both surfaces. For example, if a compound sheet was used as an upper layer and a pure organic sheet as a lower, the lower organic layer can act as a sacrificed layer. After debinding and sintering, only the upper layer remains, which has micro-patterns on the both sides. The shape of interface between layers can be controlled by changing properties of layers. It could be also influenced by the imprinting conditions, such as temperature and pressure. In order to design the shape of the interface, finite element analysis was employed in the present paper. Mooney-Rivlin’s deformation model was used to express deformation of materials during imprinting. In this paper, we compared the simulated results with experimental data to show effectiveness of the present simulation method.
URIhttp://hdl.handle.net/2117/183311
ISBN978-84-941531-5-0
Collections
Share: