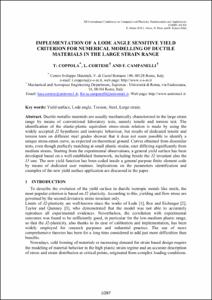 Show full item record
Coppola, T.
Cortese, L.
Campanelli, F.
Document typeConference report
PublisherCIMNE
Rights accessOpen Access
All rights reserved. This work is protected by the corresponding intellectual and industrial property rights. Without prejudice to any existing legal exemptions, reproduction, distribution, public communication or transformation of this work are prohibited without permission of the copyright holder
Abstract
Ductile metallic materials are usually mechanically characterized in the large strain range by means of conventional laboratory tests, namely tensile and torsion test. The identification of the elastic-plastic equivalent stress-strain relation is made by using the widely accepted J2 hypothesis and isotropic behaviour, but results of dedicated tensile and torsion tests on different steel grades showed that it does not seem possible to identify a unique stress-strain curve, as expected on theoretical ground. Curves obtained from dissimilar tests, even though perfectly matching at small plastic strains, start differing significantly from medium strains. Starting from the experimental observations, a general yield surface has been developed based on a well established framework, including beside the J2 invariant also the J3 one. The new yield function has been coded inside a general purpose finite element code by means of dedicated user routines. Implications on the parameters identification and examples of the new yield surface application are discussed in the paper.
URIhttp://hdl.handle.net/2117/183240
ISBN978-84-941531-5-0
Collections
Share: