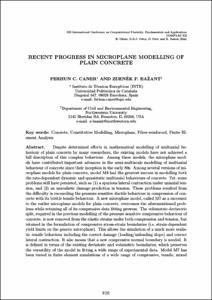 Bazant, Zdenek P.
Document typeConference report
PublisherCIMNE
Rights accessOpen Access
Abstract
Despite determined eﬀorts in mathematical modelling of multiaxial behaviour of plain concrete by many researchers, the existing models have not achieved a full description of this complex behaviour. Among these models, the microplane models have contributed important advances in the semi-multiscale modelling of multiaxial behaviour of concrete since their inception in the early 80s. Among several versions of microplane models for plain concrete, model M4 had the greatest success in modelling both the rate-dependent dynamic and quasistatic multiaxial behaviours of concrete. Yet, some problems still have persisted, such as (1) a spurious lateral contraction under uniaxial tension, and (2) an unrealistic damage prediction in tension. These problems resulted from the diﬃculty in reconciling the pressure sensitive ductile behaviour in compression of concrete with its brittle tensile behaviour. A new microplane model, called M7 as a successor to the earlier microplane models for plain concrete, overcomes the aforementioned problems while retaining all of its compressive data ﬁtting prowess. The volumetric-deviatoric split, required in the previous modelling of the pressure sensitive compressive behaviour of concrete, is now removed from the elastic strains under both compression and tension, but retained in the formulation of compressive stress-strain boundaries (i.e, strain-dependent yield limits on the generic microplane). This allows the simulation of a much more realistic tensile behaviour including the correct damage (loading/unloading slope) and correct lateral contraction. It also means that a new compressive normal boundary is needed. It is deﬁned in terms of the existing deviatoric and volumetric boundaries, which preserves the versatility of the model in ﬁtting a wide range of experimental data. Model M7 has been tested in ﬁnite element simulations of a wide range of compressive, tensile, mixed mode fracture tests and vertex eﬀect tests, as well as compression-tension load cycles. It has recently been extended to ﬁber reinforced concrete and rate dependent behaviour of plain concrete. Perforations of concrete walls by missiles in which enormous strain rates (on the order of 104s−1) are encountered have also been simulated successfully using the rate dependent extension of the model M7, whose robustness is thus demonstrated.
URIhttp://hdl.handle.net/2117/182977
ISBN978-84-941531-5-0
Collections
Share: