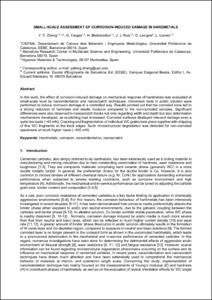 Except where otherwise noted, content on this work is licensed under a Creative Commons license : Attribution-NonCommercial-NoDerivs 3.0 Spain
Abstract
In this work, the effect of corrosion-induced damage on the mechanical response of hardmetals was evaluated at small-scale level by means of nanoindentation and nanoscratch. Damage was introduced in a controlled way through immersion in acidic solution. It is found that surface degradation associated with corrosion leads to a strong reduction of hardness and elastic modulus, as compared to non-corroded samples. Similarly, significant differences are observed in nanoscratch response, regarding not only width and depth of tracks but also deformation mechanisms developed as contact load is progressively increased. Damage was already evidenced in corroded surfaces at scratching loads one order of magnitude lower than for virgin specimens. Cracking and fragmentation of individual WC grains, together with chipping of at the track edges were the main deformation and fracture micromechanisms identified. Changes in nanoindentation and nanoscratch response and damage scenario are discussed on the basis of the corrosion-induced changes within the intrinsic microstructural assemblage of hardmetals.
CitationZheng, Y. [et al.]. Small-scale assessment of corrosion-induced damage in hardmetals. A: International Powder Metallurgy Congress and Exhibition. "Proceedings book". 2019, p. 1-6.
URIhttp://hdl.handle.net/2117/182896
Publisher versionhttps://www.epma.com/publications/euro-pm-proceedings/category/euro-pm2019
Collections
Share: