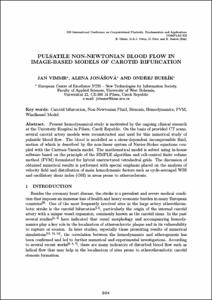 Show full item record
Vimmr, Jan
Jonásová, Alena
Bublik, Ondrej
Document typeConference report
PublisherCIMNE
Rights accessOpen Access
Abstract
Present hemodynamical study is motivated by the ongoing clinical research at the University Hospital in Pilsen, Czech Republic. On the basis of provided CT scans, several carotid artery models were reconstructed and used for this numerical study of pulsatile blood ﬂow. The blood is modelled as a shear-dependent incompressible ﬂuid, motion of which is described by the non-linear system of Navier-Stokes equations coupled with the Carreau-Yasuda model. The mathematical model is solved using in-house software based on the principle of the SIMPLE algorithm and cell-centred ﬁnite volume method (FVM) formulated for hybrid unstructured tetrahedral grids. The discussion of obtained numerical results is performed with special emphasis placed on the analysis of velocity ﬁeld and distribution of main hemodynamic factors such as cycle-averaged WSS and oscillatory shear index (OSI) in areas prone to atherosclerosis.
URIhttp://hdl.handle.net/2117/182892
ISBN978-84-941531-5-0
Collections
Share: