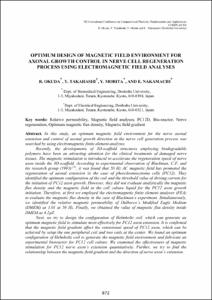 Show full item record
Okuda, R.
Takahashi, Y.
Morita, Y.
Nakamachi, E.
Document typeConference report
PublisherCIMNE
Rights accessOpen Access
All rights reserved. This work is protected by the corresponding intellectual and industrial property rights. Without prejudice to any existing legal exemptions, reproduction, distribution, public communication or transformation of this work are prohibited without permission of the copyright holder
Abstract
In this study, an optimum magnetic field environment for the nerve axonal extension and control of axonal growth direction in the nerve cell generation process was searched by using electromagnetic finite element analyses. Recently, the developments of 3D-scaffold structures employing biodegradable polymers have been an attracting attention for the clinical treatments of damaged nerve tissues. The magnetic stimulation is introduced to accelerate the regeneration speed of nerve axon inside the 3D-scaffold. According to experimental observation of Blackman, C.F. and his research group (1993) [1], it was found that 50 Hz AC magnetic field has promoted the regeneration of axonal extension in the case of pheochromocytoma cells (PC12). They identified the optimum configuration of the coil and the threshold value of driving current for the initiation of PC12 axon growth. However, they did not evaluate analytically the magnetic flux density and the magnetic field in the cell culture liquid for the PC12 axon growth initiation. Therefore, at first we employed the electromagnetic finite element analyses (FEA) to evaluate the magnetic flux density in the case of Blackman’s experiment. Simultaneously, we identified the relative magnetic permeability of Dulbecco’s Modified Eagle Medium (DMEM) as 1.01 at 50 Hz. Finally, we obtained the value of magnetic flux density inside DMEM as 4.2  T. Next, we try to design the configuration of Helmholtz coil, which can generate an optimum magnetic field to stimulate most effectively for PC12 axon extension. It is confirmed that the magnetic field gradient affect the extensional speed of PC12 axon, which can be achieved by setup the one peripheral coil and two coils at the center. We found an optimum configuration of Helmholtz coil to generate the magnetic field environment and fabricate an experimental bioreactor for PC12 cell culture. We examined the effectiveness of magnetic stimulation for PC12 nerve axon’s extension quantitatively. Further, we try to find the relationship between the magnetic field gradient and the direction of nerve axon’s extension.
URIhttp://hdl.handle.net/2117/182889
ISBN978-84-941531-5-0
Collections
Share: