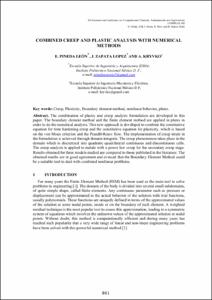 Show full item record
Pineda León, E.
Zapata López, E.
Kryvko, A.
Document typeConference report
PublisherCIMNE
Rights accessOpen Access
Abstract
The combination of plastic and creep analysis formulation are developed in this paper. The boundary element method and the finite element method are applied in plates in order to do the numerical analysis. This new approach is developed to combine the constitutive equation for time hardening creep and the constitutive equation for plasticity, which is based on the von Mises criterion and the Prandtl-Reuss flow. The implementation of creep strain in the formulation is achieved through domain integrals. The creep phenomenon takes place in the domain which is discretized into quadratic quadrilateral continuous and discontinuous cells. The creep analysis is applied to metals with a power law creep for the secondary creep stage. Results obtained for three models studied are compared to those published in the literature. The obtained results are in good agreement and evinced that the Boundary Element Method could be a suitable tool to deal with combined nonlinear problems.
URIhttp://hdl.handle.net/2117/182866
ISBN978-84-941531-5-0
Collections
Share: