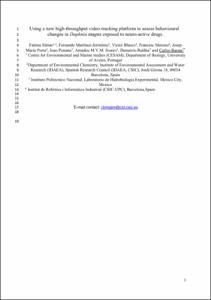 One of the major challenges that faces today regulatory risk assessment is to speed up the way of assessing threshold sublethal detrimental effects of existing and new chemical products. Recently advances in imaging allows to monitor in real time the behaviour of individuals under a given stress. Light is a common stress for many different organisms. Fish larvae and many invertebrate species respond to light altering their behaviour. The water flea Daphnia magna as many other zooplanktonic species has a marked diel vertical phototactic swimming behaviour against light due to fish predation. The aim of this study was to develop a high throughput image analysis to study changes in the vertical swimming behaviour to light of D. magna first reproductive adult females exposed to 0.1 and 1 µg/L of four psychiatric drugs: diazepam, fluoxetine, propranolol and carbamazepine during their entire life. Experiments were conducted using a new custom designed vertical oriented four 50 mL chamber device controlled by the Noldus software (Netherlands). Changes in speed, preferred area (bottom vs upper areas) and animal aggregation were analysed using groups of animals under consecutive periods of dark and apical light stimulus of different intensities. Obtained results indicated that light intensity increased the speed but low light intensities allowed to better discriminate individual responses to the studied drugs. The four tested drugs decreased the response of exposed organisms to light: individuals move less, were closer to the bottom and at low light intensities were closer each other. At high light intensities, however, exposed individuals were less aggregated. Propranolol, carbamazepine and fluoxetine were the compounds effecting most the behaviour. Our results indicated that psychiatric drugs at environmental relevant concentrations alter the vertical phototactic behaviour of D. magna individuals and that it is possible to develop appropriate high-throughput image analysis devices to measure those responses.