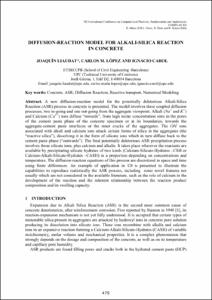 Document typeConference report
PublisherCIMNE
Rights accessOpen Access
All rights reserved. This work is protected by the corresponding intellectual and industrial property rights. Without prejudice to any existing legal exemptions, reproduction, distribution, public communication or transformation of this work are prohibited without permission of the copyright holder
Abstract
A new diffusion-reaction model for the potentially deleterious Alkali-Silica Reaction (ASR) process in concrete is presented. The model involves three coupled diffusion processes, two in-goingand one out-goingfrom the aggregate viewpoint. Alkali (Na+ and K+) and Calcium (Ca2+) ions diffuse “inwards”, from high molar concentration sites in the pores of the cement paste phase of the concrete specimen or at its boundaries, towards the aggregate-cement paste interfaces or the inner cracks of the aggregates. The OH- ions associated with alkali and calcium ions attack certain forms of silica in the aggregates (the “reactive silica”), dissolving it in the form of silicate ions which in turn diffuse back to the cement paste phase (“outwards”). The final potentially deleterious ASR precipitation process involves those silicate ions, plus calcium and alkalis. It takes place wherever the reactants are available by precipitating silicate hydrates of two kinds (Calcium-Silicate-Hydrates –CSH or Calcium-Alkali-Silicate-Hydrates –CASH) in a proportion depending on concentrations and temperature. The diffusion-reaction equations of this process are discretized in space and time using finite differences. An example of application in 1D is presented to illustrate the capabilities to reproduce realistically the ASR process, including some novel features not usually which are not considered in the available literature, such as the role of calcium in the development of the reaction and the inherent relationship between the reaction product composition and its swelling capacity.
URIhttp://hdl.handle.net/2117/182608
ISBN978-84-941531-5-0
Collections
Share: