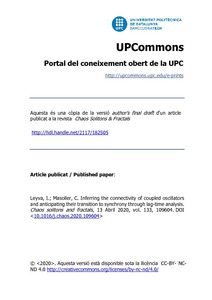 Document typeArticle
Rights accessOpen Access
ProjectSISTEMAS DINAMICOS COMPLEJOS Y HERRAMIENTAS AVANZADAS DE ANALISIS DE DATOS (AEI-PGC2018-099443-B-I00)
Abstract
The synchronization phenomenon is ubiquitous in nature. In ensembles ofcoupled oscillators, explosive synchronization is a particular type of transition tophase synchrony that is first-order as the coupling strength increases. Explosivesychronization has been observed in several natural systems, and recent evidencesuggests that it might also occur in the brain. A natural system to study thisphenomenon is the Kuramoto model that describes an ensemble of coupledphase oscillators. Here we calculate bi-variate similarity measures (the cross-correlation,¿ij, and the phase locking value, PLVij) between the phases,fi(t)andfj(t), of pairs of oscillators and determine the lag time between them as thetime-shift,tij, which gives maximum similarity (i.e., the maximum of¿ij(t) orPLVij(t)). We find that, as the transition to synchrony is approached, changesin the distribution of lag times provide an earlier warning of the synchronizationtransition (either gradual or explosive). The analysis of experimental data,recorded from Rossler-like electronic chaotic oscillators, suggests that thesefindings are not limited to phase oscillators, as the lag times display qualitativelysimilar behavior with increasing coupling strength, as in the Kuramoto oscillators.We also analyze the statistical relationship between the lag times between pairsof oscillators and the existence of a direct connection between them. We findthat depending on the strength of the coupling, the lags can be informative ofthe network connectivity.
CitationLeyva, I.; Masoller, C. Inferring the connectivity of coupled oscillators and anticipating their transition to synchrony through lag-time analysis. "Chaos solitons and fractals", 13 Abril 2020, vol. 133, p. 109604:1-109604:5.
URIhttp://hdl.handle.net/2117/182505
DOI10.1016/j.chaos.2020.109604
ISSN0960-0779
Publisher versionhttps://www.sciencedirect.com/science/article/abs/pii/S0960077920300035
Collections
Share: