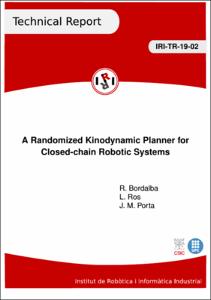 Except where otherwise noted, content on this work is licensed under a Creative Commons license : Attribution-NonCommercial-NoDerivs 3.0 Spain
Abstract
Kinodynamic RRT planners are effective tools for finding feasible trajectories in many classes of robotic systems. However, they are hard to apply to systems with closed-kinematic chains, like parallel robots, cooperating arms manipulating an object, or legged robots keeping their feet in contact with the environ- ment. The state space of such systems is an implicitly-defined manifold, which complicates the design of the sampling and steering procedures, and leads to trajectories that drift away from the manifold when standard integration methods are used. To address these issues, this report presents a kinodynamic RRT planner that constructs an atlas of the state space incrementally, and uses this atlas to both generate ran- dom states, and to dynamically steer the system towards such states. The steering method is based on computing linear quadratic regulators from the atlas charts, which greatly increases the planner efficiency in comparison to the standard method that simulates random actions. The atlas also allows the integration of the equations of motion as a differential equation on the state space manifold, which eliminates any drift from such manifold and thus results in accurate trajectories. To the best of our knowledge, this is the first kinodynamic planner that explicitly takes closed kinematic chains into account. We illustrate the performance of the approach in significantly complex tasks, including planar and spatial robots that have to lift or throw a load at a given velocity using torque-limited actuators.
CitationBordalba, R.; Ros, L.; Porta, J. "A randomized kinodynamic planner for closed-chain robotic systems". 2019.
Is part ofIRI-TR-19-02
URIhttp://hdl.handle.net/2117/182364
Collections
Share: