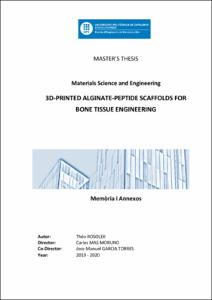 Except where otherwise noted, content on this work is licensed under a Creative Commons license : Attribution-NonCommercial-NoDerivs 3.0 Spain
Abstract
A main challenge of Tissue engineering is to create sustainable scaffolds that provide optimal biological properties to mimic the extracellular matrix(ECM). The aim of this project is to develop RGD modified alginate bioinks for creating 3D-printed scaffolds for bone tissue engineering. To achieve this purpose, a functionalisation protocol has been performed and improved and 2D biofilms have been elaborated. Then, physicochemical characterisation methods such as XPS and fluorescence confocal microscopy were carried out on films together with in vitro cell-based assays. After that, 3D filaments were created and biological characterisations once again carriedout. The amount of peptide being little, its presence with physical and chemical characterisation was hard to prove. However, successful biological results on biofilms spotlighted the presence of peptide and its homogeneous repartition in the hydrogel. It has also been detected that RGD functionalised films showed a great cell adhesion and spreading comparing to non-functionalised ones.Therefore, a better bioactivity was found after addition of RGD peptide sequences. However, filaments results being unreliable, further characterisation technics such as radiolabelling, radioactivity or biological assays with human cells have to be carried out to corroborate the results of this project.
SubjectsTissue engineering, Three-dimensional printing, Biomedical materials, Enginyeria de teixits, Impressió 3D, Teixits -- Bastides, Materials biomèdics
DegreeMOBILITAT INCOMING
URIhttp://hdl.handle.net/2117/182354
Collections
Share: