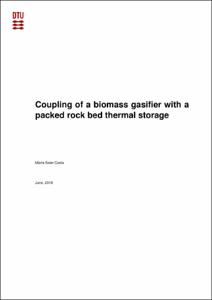 CovenanteeDanmarks tekniske universitet
Document typeMaster thesis
Rights accessOpen Access
All rights reserved. This work is protected by the corresponding intellectual and industrial property rights. Without prejudice to any existing legal exemptions, reproduction, distribution, public communication or transformation of this work are prohibited without permission of the copyright holder
Abstract
The present project role is to study and model the interaction between a sensible heat storage by means of rocks and an electrically heated biomass gasifier to find a possible synergy between these two technologies and study its feasibility. It starts from the data of the biomass gasifier that was developed by DTU KT over years of investigation and from the experimental characterization of the high temperature thermal energy storage (HT-TES) in rock beds at DTU Energy. A hightemperature thermal energy storage in rock bed is a possible solution to the energy storage issue when using renewable sources. At the end of 2018, DTU Energy built an enhanced second prototype of a rock bed storage, with 3,2 m³ of rocks and a vertical flow configuration, that can store heat at temperatures up to 650°C. Its experimental characterization has been an important part of the current work by doing several tests and analyzing its operation, mainly by studying the charge and discharge phases with different flow rates in order to find its best performance and roundtrip efficiency. The unit contains 5.394 kg of Swedish stones of the type diabase and a description of the testing facility is provided. After an overview of the equations considered for the data post-processing and calculation of heat losses, the validation and results of the rock bed operation are presented. The final roundtrip efficiency value found for the rock bed analyzed is around 76%. Once the feasibility of a rock storage was proven, its coupling with a biomass gasifier could provide a range of synergies going forward. The outlet air of the HT-TES, heated by the heat stored into the rocks, can be used to provide heat to the gasifier. The gasifier needs heat for the high-temperature conversion of solid fuel into a combustible product gas. The coupling of a scaled rock bed with an electrically heated biomass gasifier has been modelled considering two configurations: a direct recirculation of the rock bed outlet air after the heat exchanger with the gasifier, and the use of a HRSG (Heat Recovery Steam Generator) to afterwards produce electricity. Air recirculation during the rock bed charge phase was always assumed. These coupling configurations were evaluated per different electricity hourly prices of several years due to the number of charge-discharge phases and its duration change depending on the price point set as a border to distinct between time to buy or sell the electricity. The results showed that HT-TES in rock beds has a role to play in future sustainable energy systems and they are also applicable at larger scales and potentially useful for any country of the world. The coupling between a theoretical scaled rock bed with an electrically heated biomass gasifier turned out to be economically profitable in most of the cases
SubjectsBiomass gasification, Energy storage, Biomassa -- Gasificació, Energia -- Emmagatzematge
DegreeMÀSTER UNIVERSITARI EN ENGINYERIA INDUSTRIAL (Pla 2014)
URIhttp://hdl.handle.net/2117/182341
Collections
Share: