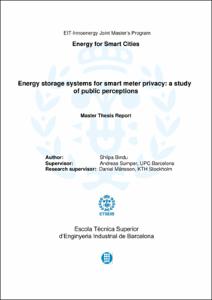 Document typeMaster thesis
Rights accessOpen Access
Abstract
Smart meters are a vital step for transitioning to a smart grid architecture. Studies have shown that it is possible to extract appliance usage information through non-intrusive load monitoring methods. This data can be used by third-parties for unwanted activities like targeted marketing, home invasion, etc. It is postulated that the data leakage will be minimum when the power flow from/to the grid is piecewise linear. To achieve linearity, the use of energy storage systems is investigated. Energy storage systems (ESS) are being increasingly used by customers having solar energy production. In this project, an algorithm for the energy management unit (EMU) to control the ESS is proposed which maintains piecewise linearity. Two types of users are considered for the study: 1. user who injects excess energy to the grid 2. user who does not (or is not allowed by law) to inject power to the grid. The effect of the algorithm on both users is studied. The minimum capacity of ESS for data leakage prevention is analysed for both cases. Data from four different households is used in different combinations to obtain the mean capacity required. Using this data, an equation is formulated for the minimum capacity of ESS required to maintain linearity in power flows. The second part of the study is to understand how people perceive smart meter privacy issues and how much they are willing to spend for mitigating privacy breaches. The survey is done in Sweden. Sweden was the first European country to have 100% smart meter roll-out. In 2020, the smart meters installed during the first roll-out will reach their economic lifespan. Hence, the country is preparing for a second-generation mass roll-out of smart meters. The perception of people regarding smart meters is identified from two perspectives. First, the consumers are directly surveyed for estimating their awareness of smart meter privacy problems and their willingness to invest in technologies that prevent such issues. Second, different stakeholders in smart metering are surveyed regarding their experience during first and second roll-out. The methods currently employed to safeguard consumer data is also explored during the second survey.
SubjectsElectric meters, Energy storage, Comptadors elèctrics, Energia -- Emmagatzematge
URIhttp://hdl.handle.net/2117/182317
Collections
Share: