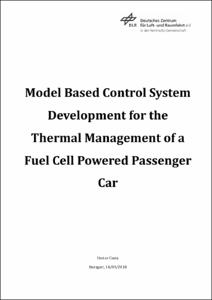 Show full item record
Costa Otero, Hector
Tutor / directorFriedrich, K. Andreas
CovenanteeUniversität Stuttgart
Document typeMaster thesis
Rights accessOpen Access
Abstract
A cooling system for a fuel cell (FC) powered car within the framework of a European project called INN-BALANCE is currently being developed at the German aeronautics and space research centre (DLR). Given a design of the cooling loop, a thermal model of it has been developed in this master thesis making use of the software Matlab Simulink™, as it is the official simulation program for the INN-BALANCE project and the one used to share all the models between the project partners. Once the thermal model was developed, a control system for the next key components of this cooling system has been designed: the 3-way valve (or bypass valve), the fan of the radiator, the main pump of the circuit and the pump and heater of a heating system meant to be used in very low ambient temperatures. The goal of this control system has been to keep the coolant inlet and outlet of the FC at temperatures of 68℃ and 80℃ respectively, or more specifically, to keep a maximum temperature difference between the FC inlet and outlet of 12K. The designed control system has been tested on a test bed whose components are slightly different to the ones that will be used on the resulting car of the INN-BALANCE project, however the goal was also to develop a control system robust enough to be able to cope with any changes on the dimensions and typology of the components. For this purpose, the test bench used has a heat exchanger whose coolant pressure loss between inlet and outlet is very similar to the one of the FC to substitute it. Another key component different on the test bench is the radiator, whose dimensions are not the definitive ones and the same applies for the fan that blows air through it. The experiments performed at the test bench showed a control system capable of keeping the temperatures at the desired levels as long as the heat dissipation capabilities of the cooling system are not surpassed.
SubjectsFuel cells, Electric vehicles, Cooling, Piles de combustible, Vehicles elèctrics, Refrigeració
URIhttp://hdl.handle.net/2117/182179
Collections
Share: