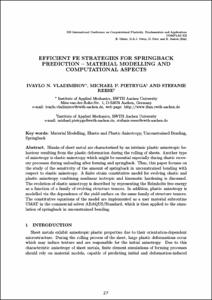 Show full item record
Vladimirov, Ivaylo N.
Pietryga, Michael P.
Reese, Stefanie
Document typeConference report
PublisherCIMNE
Rights accessOpen Access
Abstract
Blanks of sheet metal are characterized by an intrinsic plastic anisotropic behaviour resulting from the plastic deformation during the rolling of sheets. Another type of anisotropy is elastic anisotropy which might be essential especially during elastic recovery processes during unloading after forming and springback. Thus, this paper focuses on the study of the sensitivity of the amount of springback in unconstrained bending with respect to elastic anisotropy. A ﬁnite strain constitutive model for evolving elastic and plastic anisotropy combining nonlinear isotropic and kinematic hardening is discussed. The evolution of elastic anisotropy is described by representing the Helmholtz free energy as a function of a family of evolving structure tensors. In addition, plastic anisotropy is modelled via the dependence of the yield surface on the same family of structure tensors. The constitutive equations of the model are implemented as a user material subroutine UMAT in the commercial solver ABAQUS/Standard, which is then applied to the simulation of springback in unconstrained bending.
URIhttp://hdl.handle.net/2117/182177
ISBN978-84-941531-5-0
Collections
Share: