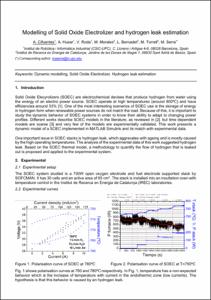 Document typeConference report
Rights accessOpen Access
Abstract
Solid Oxide Elecyrolizers (SOEC) are electrochemical devises that produce hydrogen from water using the energy of an electric power source. SOEC operate at high temperatures (around 800ºC) and have efficiencies around 53% [1]. One of the most interesting scenarios of SOEC use is the storage of energy in hydrogen form when renewable power sources do not match the load. Because of this, it is important to study the dynamic behavior of SOEC systems in order to know their ability to adapt to changing power profiles. Different works describe SOEC models in the literature, as reviewed in [2], but time dependent models are scarse [3] and very few of the models are experimentally validated. This work presents a dy-namic model of a SOEC implemented in MATLAB Simulink and its match with experimental data. One important issue in SOEC stacks is hydrogen leak, which aggravates with ageing and is mostly caused by the high operating temperatures. The analysis of the experimental data of this work suggested hydrogen leak. Based on the SOEC thermal model, a methodology to quantify the flow of hydrogen that is leaked out is proposed and applied to the experimental system.
CitationCifuentes, A. [et al.]. Modelling of solid oxide electrolizer and hydrogen leak estimation. A: Iberian Symposium on Hydrogen Fuel Cells and Advanced Batteries. "HYCELTEC 2019 - 7th Iberian Symposium on Hydrogen, Fuel Cells and Advanced Batteries". 2019, p. 57-59.
URIhttp://hdl.handle.net/2117/182053
Publisher versionhttp://www.ub.edu/hyceltec2019/
Collections
Share: