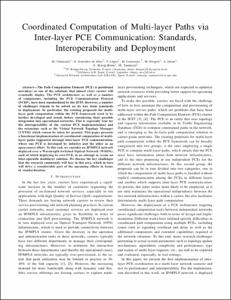 Yannuzzi, Marcelo
Document typeConference report
Rights accessOpen Access
Abstract
The Path Computation Element (PCE) is positioned nowadays as one of the solutions that almost every carrier will eventually deploy. The PCE architecture as well as a number of components, including the PCE Communication Protocol (PCEP), have been standardized by the IETF. However, a number of challenges remain to be solved on its way from standards to deployment. In particular, the existing proposals for multilayer path computation within the PCE framework need to be further developed and tested, before considering their possible integration into operational networks. This is especially true for the interoperability of the various PCE implementations and the extensions such as the Virtual Network Topology Manager (VNTM) which cannot be taken for granted. This paper presents a functional implementation of coordinated computation of multilayer paths supported through inter-layer PCE communication, where one PCE is developed by industry and the other as an open-source effort. To this end, we consider an IP/MPLS network deployed over a Wavelength Switched Optical Network (WSON), each of which deploying its own PCE, in an attempt to create an inter-operable multilayer solution. We discuss the key challenges that the research community will face in this area, which in turn will drive a considerable part of the upcoming efforts in terms of standardization
CitationChamania, M. [et al.]. Coordinated Computation of Multi-layer Paths via Inter-layer PCE Communication: Standards, Interoperability and Deployment. A: IEEE International Conference on Communications. "2012 IEEE International Conference on Communications". 2012.
URIhttp://hdl.handle.net/2117/18192
Publisher versionhttp://www.vlopezalvarez.com/Profesional/Publications/Conferences/2012_ICC_WS.pdf
Collections
Share: