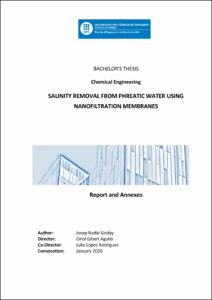 Document typeBachelor thesis
Rights accessOpen Access
Abstract
The purpose of this projectis the characterization and desalination of groundwater in the area of Sant Adrià del Besòs, Catalonia, in order to improve its quality and make it suitable for other uses and in the best of cases,upgrade its quality to the status of drinkable water (RD 140/2003). The composition of this water varies depending on the season and the meteorological conditions of the year. Excesses of iron, manganese, arsenic, ammonium and chloride need to be removed so that the condition of drinkability can be achieved. Treatment plants of this kind of waters normally require one stage for every substance that needs to be eliminated. For years, nanofiltration has grown as an alternative method to these treatments due to its capability of removal with only one stage.Initially, the water was characterized andexcesses of manganese, arsenic and chloride were observed: 141,6 ppb, 126,0 ppb I 335,2 ppm, respectively. Three commercial membranes made of polyamide were evaluated (NF270, NF90 and DL) in a flat membrane module (140 cm2) at a laboratory scale. In order to determine the permeate quality and its compliance with the RD 140/2003, the effects of trans-membrane pressure were studied, from 6 bar to 32 bar. High rejections were obtained for divalent and trivalent ions at ppb(DL < 70%; NF90 < 80%;NF270 < 84%)and ppm concentrations (DL < 90%; NF90 < 99%;NF270 < 88%). Chloride and manganese were rejected to the point of compliance with the Spanish regulations of drinkable waterRD 140/2003 using all three membranes; its rejections were higher than 55% and 89%, respectively. Regarding arsenic, the NF270 membrane removed 98% from the solution making it drinkable, while the NF90 and DL membranes removed around 82%. For these last two membranes, its results are satisfactory as long as the feed water contains arsenic lower than 52 ppb. Moreover, the solution-diffusion film model(SDFM)was used in order to representthe ion transport through its permeabilities.
SubjectsSaline water conversion, Membranes (Technology), Nanofiltration, Aigua salada -- Dessalatge, Membranes (Tecnologia), Nanofiltració
DegreeGRAU EN ENGINYERIA QUÍMICA (Pla 2009)
URIhttp://hdl.handle.net/2117/181679
Collections
Share: