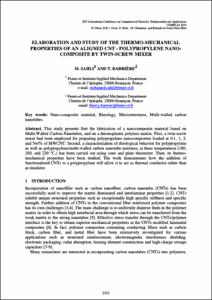 Show full item record
Sahli, M.
Barrière, T.
Document typeConference report
PublisherCIMNE
Rights accessOpen Access
Abstract
This study presents first the fabrication of a nanocomposite material based on Multi-Walled Carbon Nanotubes, and on a thermoplastic polymer matrix. First, a twin-screw mixer had been employed for preparing polypropylene nanocomposites loaded at 0.1, 1, 2, and 5wt% of MWCNT. Second, a characterization of rheological behavior for polypropylene as well as polypropylene/multi-walled carbon nanotube mixtures, at three temperatures (180, 200, and 220 °C,) has been carried out using cone and plate rheometer. Then, its thermomechanical properties have been studied. The work demonstrates how the addition of functionalized CNTs to a polypropylene will allow it to act as thermal conductor rather than as insulator.
URIhttp://hdl.handle.net/2117/181618
ISBN978-84-949194-7-3
Collections
Share: