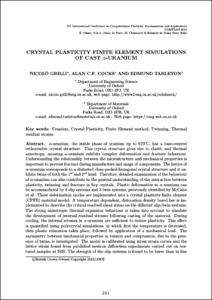 Show full item record
Grilli, Nicolò
Cocks, Alan C. F.
Tarleton, Edmund
Document typeConference report
PublisherCIMNE
Rights accessOpen Access
Abstract
α-uranium, the stable phase of uranium up to 670◦C, has a base-centred orthorombic crystal structure. This crystal structure gives rise to elastic and thermal anisotropy, meaning α-uranium exhibits complex deformation and fracture behaviour. Understanding the relationship between the microstructure and mechanical properties is important to prevent fracture during manufacture and usage of components. The lattice of α-uranium corresponds to a distorted close-packed-hexagonal crystal structure and it exhibits twins of both the 1st and 2nd kind. Therefore, detailed examination of the behaviour of α-uranium can also contribute to the general understanding of the interaction between plasticity, twinning and fracture in hcp crystals. Plastic deformation in α-uranium can be accommodated by 4 slip systems and 3 twin systems, previously identiﬁed by McCabe et al. These deformation modes are implemented into a crystal plasticity ﬁnite element (CPFE) material model. A temperature dependent, dislocation density based law is implemented to describe the critical resolved shear stress on the diﬀerent slip/twin systems. The strong anisotropic thermal expansion behaviour is taken into account to simulate the development of internal residual stresses following casting of the material. During cooling, the internal stresses in α-uranium are suﬃcient to induce plasticity. This eﬀect is quantiﬁed using polycrystal simulations, in which ﬁrst the temperature is decreased, then plastic relaxation takes place, followed by application of a mechanical load. The asymmetry between mechanical properties in tension and compression, due to the presence of twins, is investigated. The model is calibrated using stress strain curves and the lattice strain found from published neutron diﬀraction experiments carried out on textured samples at ISIS. The strength of the slip systems is found to be lower than in ﬁne grained material, while the strength of the twin system is similar to single crystals. The CPFE method allows the heterogeneity of the strain between neighbouring grains and its inﬂuence on the evolution of the internal stress state to be investigated.
URIhttp://hdl.handle.net/2117/181448
ISBN978-84-949194-7-3
Collections
Share: